X-ray safety: FAQs for the industry

Facts you should know when working with an x-ray device

Radiation is energy traveling through space, we’re exposed to it everyday. But every child knows that there are several forms of radiation – some are dangerous, some are not and in most cases the dose is the most important factor. If you work with radiation every day, the following information might be interesting and helpful.

Radiation is energy traveling through space. Sunshine is one of the most familiar forms of radiation. It delivers light, heat and suntans. We control its effect on us with sunglasses, shade, air conditioners, hats, clothes and sunscreen. There would be no life on earth without lots of sunlight, but we have increasingly recognized that too much of it on our persons is not a good thing. In fact it may be dangerous, so we control our exposure to it.

Sunshine consists of radiation in a range of wavelengths from long-wave infra-red to shorter wavelength ultraviolet. Beyond ultraviolet are higher energy kinds of radiation which are used in medicine and which we all get in low doses from space, from the air, and from the earth. Collectively we can refer to these kinds of radiation as ionising radiation. It can cause damage to matter, particularly living tissue. At high levels it is therefore dangerous, so it is necessary to control our exposure.  Living things have evolved in an environment which has significant levels of ionising radiation. Furthermore, many of us owe our lives and health to such radiation produced artificially. Medical and dental X-rays discern hidden problems. Other radiation is used to diagnose ailments and some people are treated with radiation to cure disease. We all benefit from a multitude of products and services made possible by the careful use of radioactive materials.

Background radiation is that which is naturally and inevitably present in our environment. Levels of this can vary greatly. People living in granite areas or on mineralized sands receive more terrestrial radiation than others, while people living or working at high altitudes receive more cosmic radiation. A lot of our natural exposure is due to radon, a gas which seeps from the earth’s crust and is present in the air we breathe.

Ionising radiation occurs in two forms – rays and particles, at the high frequency end of the energy spectrum. Ionising radiation produces electrically-charged particles called ions in the materials it strikes. This process is called ionisation. lonising radiation has the ability to affect the large chemical molecules of which all living things are made and so cause changes which are biologically important. 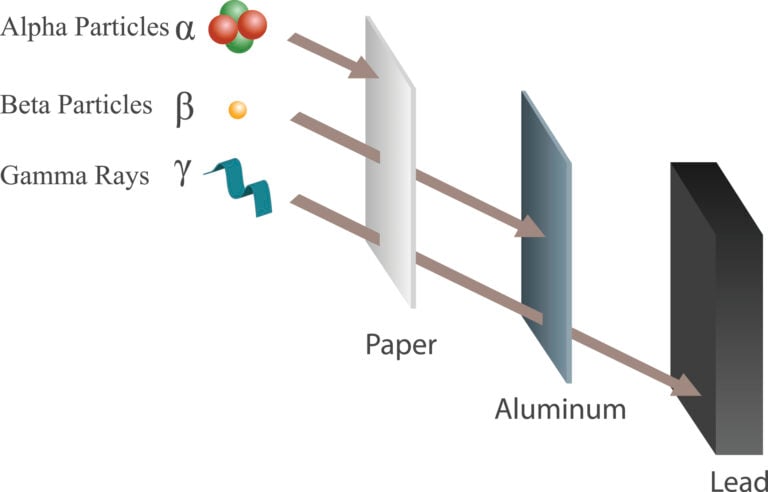 There are several types of ionising radiation:

X-rays and gamma rays, like light, represent energy transmitted in a wave without the movement of material, just as heat and light from a fire or the sun travels through space.  X-rays and gamma rays are virtually identical except that X-rays do not come from the atomic nucleus. Unlike light, they both have great penetrating power and can pass through the human body. Thick barriers of concrete, lead or water are used as protection from them.

Alpha particles have a positive electrical charge and are emitted from naturally occurring heavy elements such as uranium and radium, as well as from some man-made elements. Because of their relatively large size, alpha particles collide readily with matter and lose their energy quickly. They therefore have little penetrating power and can be stopped by the first layer of skin or a sheet of paper. However, if they are taken into the body, for example by breathing or swallowing, alpha particles can affect the body’s cells. Inside the body, because they give up their energy over a relatively short distance, alpha particles can inflict more biological damage than other radiations.

Beta particles are fast-moving electrons ejected from the nuclei of atoms. These particles are much smaller than alpha particles and can penetrate up to 1 to 2 centimeters of water or human flesh. Beta particles are emitted from many radioactive elements. They can be stopped by a sheet of aluminum a few millimeters thick.

Cosmic radiation consist of a variety of very energetic particles including protons which bombard the earth from outer space. They are more intense at higher altitudes than at sea level where the earth’s atmosphere is most dense and gives the greatest protection.

Neutrons are particles which are also very penetrating. On earth, they mostly come from the splitting, or fissioning, of certain atoms inside a nuclear reactor. Water and concrete are the most commonly used shields against neutron radiation from the core of the nuclear reactor.

It is important to understand that ionising radiation does not cause the body to become radioactive.

How much ionising radiation is dangerous?

A damage to the body depends of course on the radiaotion dose to which a person is exposed. The following list gives an indication of the likely effects and implications of a range of radiation doses and dose rates to the whole body:

For low levels of radiation exposure the biological effects are so small they cannot be detected. Radiation protection standards assume however that the effect is directly proportional to the dose, even at low levels. According to this ‘linear’ theory of radiation effects, if the dose is halved the effect, or the risk of any effect, is halved. Higher accumulated doses of radiation, while not immediately fatal, may produce a cancer which would only be observed several years after the radiation exposure.

The body has defense mechanisms against damage induced by radiation as well as by chemical carcinogens. However, typically the body has to deal only with a relatively tiny amount of damage at any one time, as opposed to having to deal with a very large amount at once, as was the case for the atomic bomb survivors in 1945. Some allowance has been made for this effect in setting occupational risk estimates, but the degree of protection for low-level radiation exposure may well be greater than these estimates cautiously allow.

Tens of thousands of people in each technically advanced country work in environments where they may be exposed to radiation above background levels. Accordingly they wear monitoring ‘badges’ while at work, and their exposure is carefully monitored.

Naturally occurring background levels of radiation can typically range from 1.5 to 3.5  millisieverts a year and in some places can be much higher. The highest known level of background radiation affecting a substantial population is in Kerala and Madras States in India where some 140,000 people receive an annual dose rate which averages over 15 millisieverts per year from gamma, plus a similar amount from radon.

Comparable levels occur in Brazil, Iran and Sudan, with average exposures up to 38 mSv/yr. Four places are known in India and Europe where natural background radiation gives dose rates of more than 50 mSv per year. No adverse health effects have been discerned from doses arising from these high natural levels.

For comparison: The emission (radiation) of an XRAY SHARK® is less than 1/3 of the natural background radiation.

Ionising radiation is also generated in a range of medical, commercial and industrial activities. The most familiar and, in national terms, the largest of these sources of exposure is medical x-rays. A typical breakdown between natural background and artificial sources of radiation is shown in the pie chart. Natural radiation contributes about 88% of the annual dose to the population and medical procedures most of the remaining 12%. Natural and artificial radiations are not different in kind or effect.

Interesting fact: Inspected food absorbs about 100,000 x less radiation than a human during x-ray of his teeth.

Safe operation of the equipment will be ensured if you observe the following rules:

The CASSEL x-ray inspection systems have been designed to meet current relevant safety regulations. It is important to ensure the safe operation of the equipment that it is correctly installed  and regularly serviced by a properly trained engineer.

DO NOT ATTEMPT TO INSTALL OR OPERATE THIS EQUIPMENT UNLESS YOU HAVE BEEN TRAINED TO DO SO.